I have enjoyed working on black surfaces for a while, but found it difficult to get the contrasts that I wanted. I was very happy to discover the UART Dark papers.

Having previously found that some dark papers fade, before I started any serious work on it, I did lightfastness testing. I am able to put out papers and coloured pencil swatches to test in the Mediterranean sunshine during the hot, dry and mostly sunny summers, and in the course of one summer they receive as much sunshine as they would in many years in the average home.  The tests are also helped by putting out a thin strip of the Blue Wool Testing Strips so that I can see the exposure they have had. I can judge from these what the level of lightfastness is of the pencil swatches, or paper, by seeing which pencil colours have faded by the time the strips are fading at level 6 and 7. Level 7 is considered very lightfast,  and this has just started to change by the end of that season, so that the remaining unfaded colours are of higher lightfastness than level 6.  Having put out samples of the UART papers with the pencil swatches, I was very happy to find at the end of the summer that the UART papers had stayed dark. That was excellent news for me, and I have been enjoying the surface ever since. Please note that these are serious amateur tests, rather than professional ones.

Recently I heard that people were concerned that the backing might not be as durable as it is not labeled archival, so I decided to do another test with a sample upside down, so that the backing was exposed to the sunlight. It was also very hot with the daytime temperatures reaching the high thirties C on several occasions, and always in the thirties during the day time.  Of course the temperature inside the zip-lock acid free bags that I put them in for protection on the balcony would have reached above that due to the direct sun on them. Under these conditions, if there had been any problem with the backing, this should have been visible. The sample was exposed for about five and a half months Mediterranean sunshine.

Usually with non-acid-free wood based surfaces, there is lignin (wood fibre) that changes colour and deteriorates over time, usually turning yellow and brittle.  If you put out newspaper you will see rapid change, and the same for many books on shelves over time. The sample did not get darker, but turned very slightly lighter in shade, (bleaching from the sun) though a few fibres did not lighten. It seems to have the same internal structure as the control, and did not turn at all brittle under those conditions. 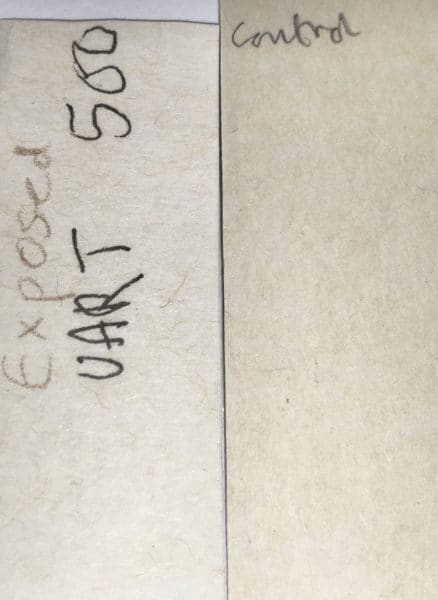 The backing of the UART papers is wood pulp, and is said to be acid free, and from my tests I have every reason to believe that is definitely is acid-free, for the reasons I give above. There are two layers of resin and the layer of abrasive grains on top of the paper backing that give a strong surface too.  If you are at all concerned, make sure that the backing board and mount boards are archival (which is always a good idea anyway) and that any glue used (for example if the paper is glued to a backing board) is archival too. I have only tested the “Dark” papers, but I assume the backing will be the same for both.

My samples for the front side of the Dark surfaces show specs of dust from the pencils used to write the grit on them.  I did not clean this off, before putting them out, though it would have been easy to do with sellotape/Scotch tape. These were the original tests from, I think, 2018.