The first thing you notice when you try colored pencils on sanded paper such as UART is “Whoa! It eats pencils like crazy!” The second thing you notice is “Hey, I covered this whole area in no time!” The pro often outweighs the con to make UART a good friend to have. Colored pencil is notorious for being a slow medium, and for the need to remember to always work from light to dark when using traditional papers and techniques.

Why use colored pencil rather than pastel pencil on UART? Less mess, and the option to frame under plexiglass instead of glass.

With experience, it becomes easier to evaluate a scene and decide whether it would be easier to interpret with traditional colored pencil layering techniques on paper, or with more pastel-like techniques on UART. In this case, I’ve chosen a dramatic sunset sky for a small study. 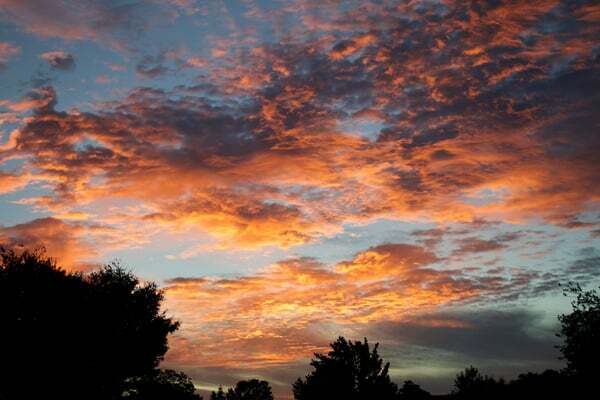 Even at only 9” x 12”, I know it would take me 30-40 hours over a couple of weeks to complete it the traditional way, gradually building up the darkest areas, minimizing speckles of paper showing through, and creating smooth transitions of color. I think this is why many colored pencil artists shy away from drawing large expanses of sky. But using UART paper, I can complete it in only a few hours!

Let me show you how that works. My supplies are a 9” x 12” sheet of UART 600 paper, a set of oil-based colored pencils, poster putty, a cheap stencil brush, and an electric eraser. I use oil-based pencils when working on UART because they have a drier consistency, which creates a powdery residue that is just what I need for this technique. 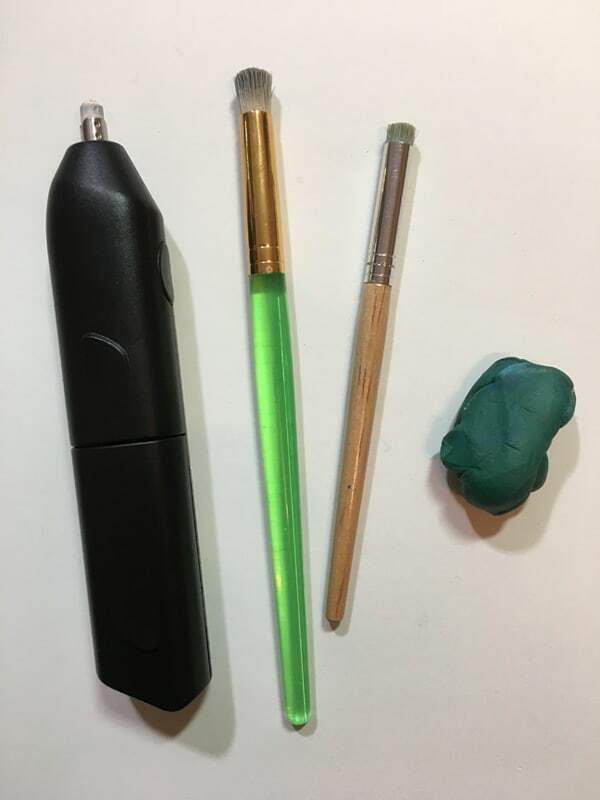 1. Upon examining the clouds in the reference photo, I saw that there are a lot of dark areas behind the bright orange sunlit clouds, and that’s what makes the highlights pop. I chose a dark blue, a light blue, and white as the base colors for the clear sky. I chose the same dark blue and a dark red as the base colors for everywhere there are dark cloud areas. I quickly and generously scrubbed the colors on, right on top of each other, making no effort to fill the tooth of the paper or preserve crisp edges—this will happen in later steps. I resisted the urge to blow the residue away, so it was present for the next step. 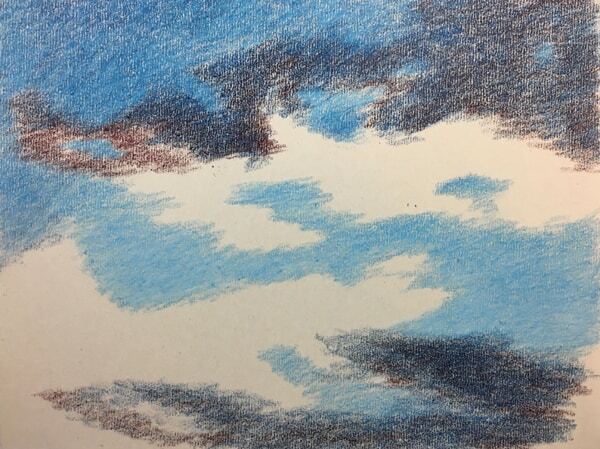 2. With the stencil brush, I very gently swirled and stroked with small movements to work the powdery pigment residue into the tooth of the paper. 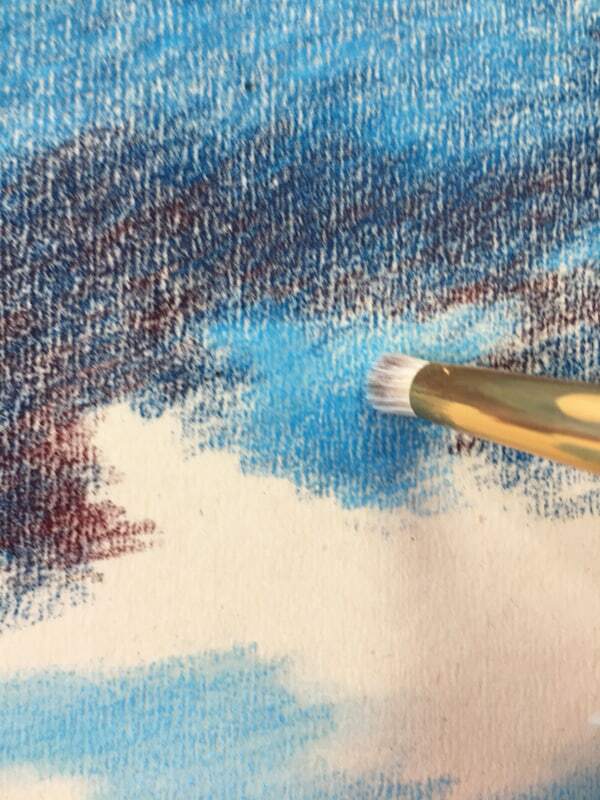 There was an initial blotchiness and roughness that I smoothed out by applying more pencil pigment and more brush strokes. I resisted the urge to press and scrub with the brush, because that would’ve pulled pigment back out of the paper tooth and defeated my effort to make the blend smooth. I wasn’t concerned with perfect smoothness in the clouds, because this was only the underpainting. 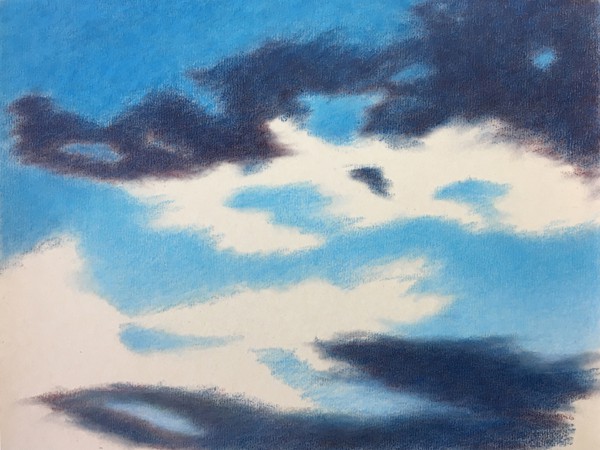 3. Once I was happy with the blue sky and dark clouds, I did the same for the sunlit clouds. I used warm yellows and oranges, and was careful not to overlap any of the blues since that would result in a green or a grayed-orange rim. 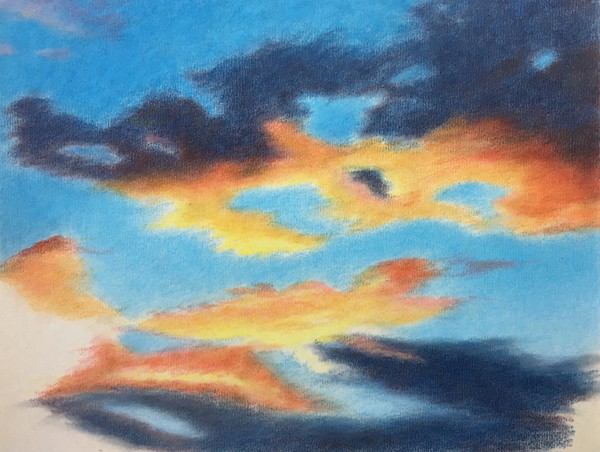 This point in the process is the “ugly stage”, where I always think it looks awful and it’s not going to work. But you need to keep going and trust the process!

4. I used the poster putty and the electric eraser to subtract all pigment from small areas in the dark clouds to make clean places for the puffy foreground sunlit clouds. 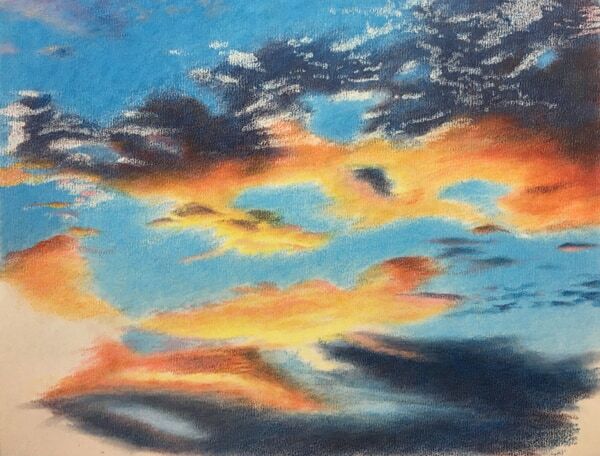 I could’ve done it all by dabbing with the poster putty, but the electric eraser speeded the process. Where any pigment persisted, I added a layer of white or light pink to prepare the area further.

5. Into the newly-cleaned areas, layered the same colors as in the other sunlit clouds. I made the tops redder than the bottoms to suggest form. Then I punched up their contrast by further darkening the background clouds around them with dark blue and dark red. 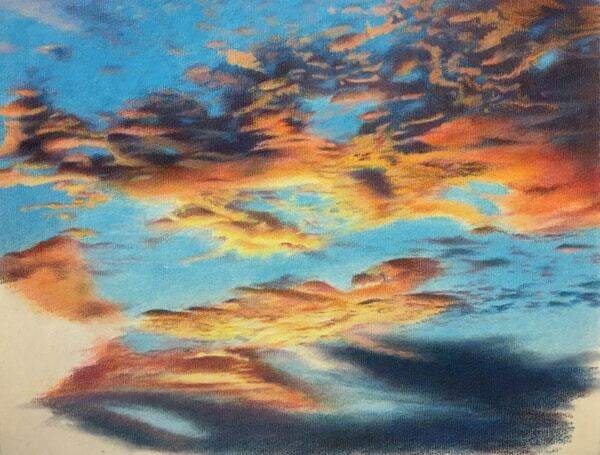 6. I sharpened some edges and smoothed grainy areas with very sharp pencils and a light touch, or light strokes with the stencil brush. 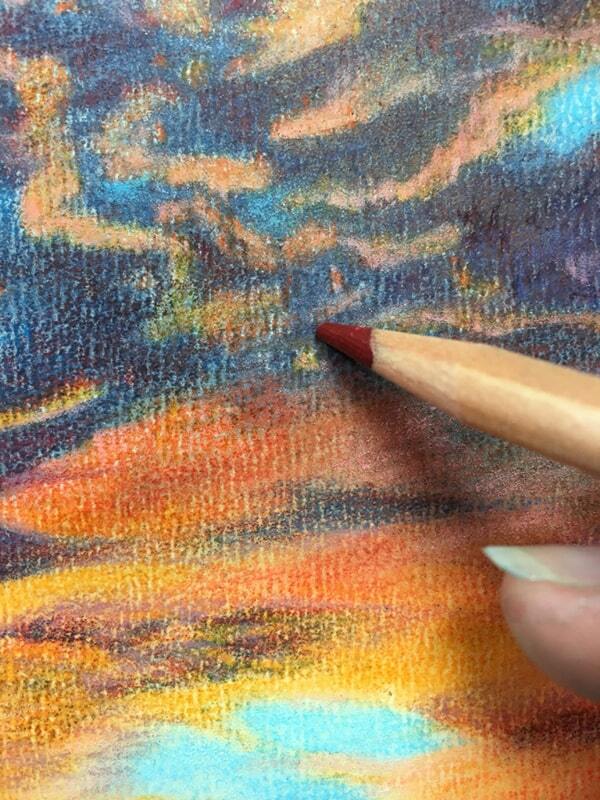 7. I waited until the end to develop the dark foreground bushes so that dark pigment dust would have as short an opportunity as possible to pollute the sky. I generously scrubbed in black, smoothed it with the stencil brush, and repeated until it was very even.

The end result is a simplified color study of a very complex sky, which helped me work out in a short time how I could execute a much larger and more detailed version with the same set of colored pencils. 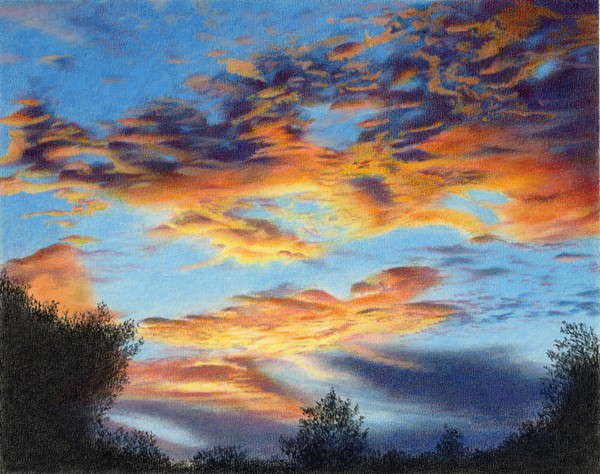 I hope you found this process educational!

Check out Denise’s work at www.denisejhowardart.com.