Muscle Memory? “Isn’t that for music, or dance?” you ask. Yes, and it’s for art, too. Until 4 years ago, when I began giving a lot of pastel workshops across the country, you would never catch me painting the same thing twice. My response would have been, “that’s boring.” But over these last several years, I have discovered that there is merit in repetition – and it has to do with muscle memory*.

What is the best way to learn something? To do it, and then to do it again. And when you do it many times, your brain stores the information you need to repeat the task. How will you learn to draw an apple? To draw it over and over.

In almost every workshop I give, there are several students who look at me incredulously, “you want us to do it again?” “the same thing?” “four times?” “Yes,” I say, “again. And then we’ll do a large one.”

It’s amazing how effective repetition is when learning how to draw or paint an object.  By the time we do the exercise 4 times, the students are all amazed at their results. It seems with each timed exercise, their painting gets better, even as the time gets shorter! They begin to “know” the object or landscape. They “feel” the shapes. Their brain is beginning to “remember” the motion it took to make the shape.

I not only paint the same thing over and over, I put a different spin on each one. This group of sagebrush that I painted on UArt 400 en Plein Air is a good example.  I painted it four times, but each time, before beginning, I focused on something different. 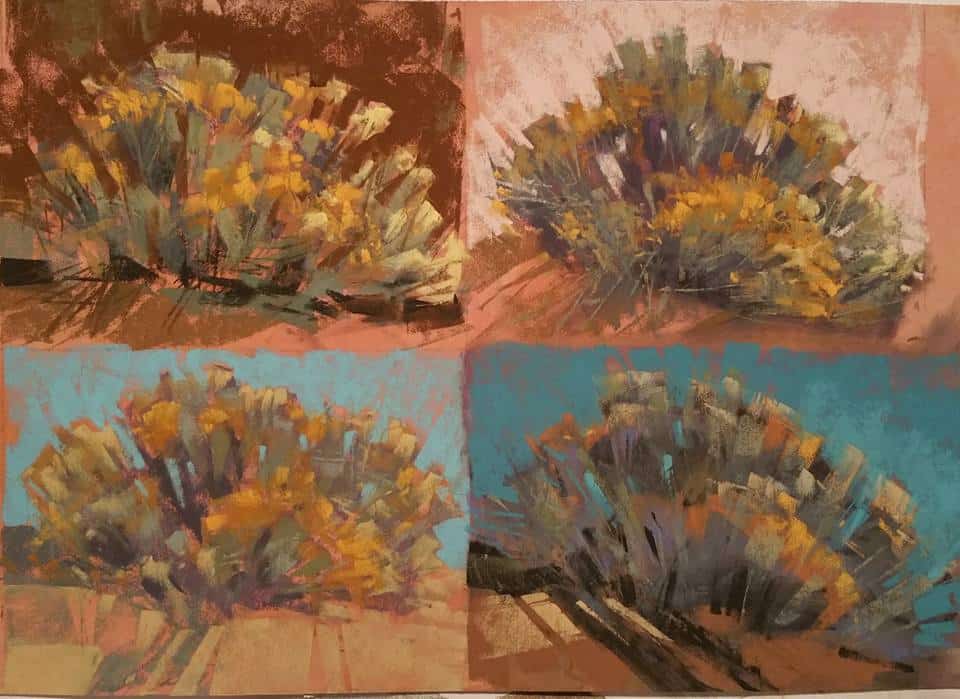 #1 (upper left) is a little rough – my muscle memory had not yet taken hold. I was focusing on the sage greens and sage blues, how to emphasize the composition of the blooms, and keeping an eye on the clock, which I had set on 10 minutes. Because I needed to define the shape of the sage better, I decided to go with a dark brown background.

#2 (upper right) my main focus was to create a more definitive “sagebrush shape.” I added more purple and dark neutral green with the first strokes. Adding the sienna and deep yellow, I made a point of placing those colors to draw the eye in and around, using a light yellow for a few highlights and then, last, but not least, I punched in the background in the last 55 seconds – placing bold strokes to shape the sage and opening up holes to give it an open feel that is common with sagebrush. My muscle memory was beginning to kick in. Finished in 10 minutes.

#3 (lower left) I wanted to simplify a bit. I really like the right side of the sage, where you can see how simply it is painted. I exaggerated the dark area on the left to get it to sit better. I added the light neutral on the foreground, leaving bits of the underpainting showing through to lead the eye up into the image. And last came the turquoise background, again using it to shape the sage, and cut out areas to allow it to breath. Finished in 14 minutes.

#4 (bottom right) This is my favorite of the four. I was getting tired, standing out in 820 weather. Scrubbed it twice. So I set the timer for 5 minutes and went for it! By this time my muscle memory is in full gear, allowing me to simplify, paint quickly with a softer touch. I used more purple as you can see peeking through and punched in a nice deep Terry Ludwig sienna in the foreground. I added dark areas at the bottom to give it punch, and then the turquoise background, and last, the touch of sunlight in the foreground. Finished in just under 10 minutes.

*Muscle memory has been used synonymously with motor learning, which is a form of procedural memory that involves consolidating a specific motor task into memory through repetition. When a movement is repeated over time, a long-term muscle memory is created for that task, eventually allowing it to be performed without conscious effort. This process decreases the need for attention and creates maximum efficiency within the motor and memory systems.  https://en.wikipedia.org/wiki/Muscle_memory